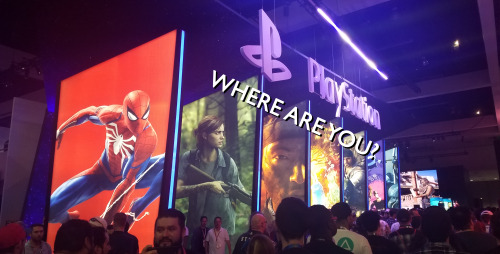 After all of the demo booths closed up and monitors were switched off at 6pm on the final day of E3 2019, it seemed like a typical wrap up to the annual gaming convention, which has now let in public attendees for the last three years. But as I took time to really reflect on the experience this year, something felt entirely different. It took me some time to pinpoint what exactly it was. As my wife and I were making our way out to the parking garage, it finally dawned on me: the attendance.

It felt like the show was easier to navigate than the previous two. Turns out that it was much easier because the volume of people was down from 69,200 in 2018 to 66,100 this year. I know what you are thinking: Uh…66,000 people is a lot of damn people! And It definitely is, but on the other end of that perspective, having 3,100 less people to maneuver around and compete in lines with, is a much more helpful experience.

E3 still had over 200 exhibitors show up like the previous year, but a quarter of them were all new, whereas last year had 85 new exhibitors. This shift in new exhibitors could be either good or bad, depending how you look at it. In the end it’s just a notable statistic for the event.

Unfortunately, the ESA did not disclose the amount of attendees that had purchased on the “Gamer Pass” level, so we don’t actually know if the attendance was drastically lower in that aspect. What we do know, however, is that many big companies did not show up to this year’s event, like Activision and Electronic Arts. Most notably was Sony, who usually has a huge presence, both on stage and on the show floor with booths full of demos for first and third party titles.

Image of Playstation booth from #E32018

Perhaps people took this factor into account when deciding if they wanted to make the trip this year. Microsoft still has their presence across the street at the Microsoft Theater (How appropriate of a location), but even they are not technically considered a part of E3. Anyone can attend that exhibit for free. Nintendo probably had the biggest presence on the floor, but they only had a couple of stand out games to show with dreadful lines.

Visually, the absence was quite noticeable on the floor. The walking lanes felt wider, the booths appeared more spaced out and smaller. Lines even seemed to be less intimidating with lower wait times than typical. Well, for the most part…the stand out titles like Zelda: Link’s Awakening remake and Cyber Punk 2077 had outrageous wait times no matter the time of day, with no fault of their own, these are highly anticipated games. Beyond that, even the food concession stands had drastically less wait times and that was one of the worst parts of last year.

See, Spider-Man couldn’t even fight these food lines at #E32018!

Another factor that may have impacted the attendance could be the shortening of show floor hours for E3. Last year, some if not all Media coverage was done within the same time slots as the public, which caught some criticism. This year public attendees received less overall hours to roam. Opening day didn’t start until 2pm and ended at 7pm. Thats only 5 hours to potentially stand in a line and see only one game.

Not exactly an enticing situation and it could have very well discouraged people from paying the hefty $250 per ticket on top of the travel expenses to attend. Who knows, not having to share the floor space with the Media could have simply gave an illusion of less attendance.

Overall, I consistently felt like something was missing from E3 this year. It didn’t have the spectacle atmosphere that it did previously. It isn’t necessarily a bad thing for a public attendee because it has its benefits, but on the industry side, it can be telling of where the future of console and game unveilings could go. Maybe E3 isn’t the big marketing value for developers that it grew to be over the many years. Only time will tell, but expect to see the ESA make changes to the show floor formula in order to raise the attendance as much as they can.

Saw my first #Maui #Cat of the trip. 😻 He shall

Picked up the new issue of #Ironcat and this varia

Autumn is trying to absorb the full knowledge of t

Autumn snores in her sleep and I won't ever be tir

Scarlett is helping me edit some #HaloInfinite hig